The University of Agriculture in Brno (UOA) was established by Act No. 460 as of 24 July 1919 and maintained its name until 1994. The establishment of the University was facilitated greatly by the transformation of the Agricultural College in Tábor into a university, its relocation to Brno and location in a new building of the Regional Institute for the Blind in Brno - Černá Pole. The UOA consisted of two sections: Agriculture and Forestry. In the academic year 1919/1920, classes were started in the Agricultural Section only, while the Forestry Section was relocated to the Czech Technical University in Prague. The Forestry Section was opened in October 1920 after previous problems with its relocation to Brno.

The post-war financial crisis and efforts to relocate the school to Slovakia threatened the University’s existence between the years 1920 and 1924. The University Forestry Training Enterprise in Adamov was assigned to the University for the Forestry Section in 1923. Two years later, it

acquired the University Agriculture Enterprise Žabčice for the needs of the Agricultural Section. In 1930 and 1931, the consequences of the Great Depression led to attempts to dissolve the University. A turning point in the University’s life was 17 November 1939 when, like other Czech universities, it was closed by Nazi occupants and subjected to German administration. There were no classes and, subsequently, seventeen institutes for applied research were opened. In the protectorate period, the university suffered major material damage and casualties among members of its academic community. A successful post-war reconstruction was halted by the events of February 1948 (the Communist coup d'état in Czechoslovakia), when 27.7% of students did not pass the political vetting.

usbandry. TheVeterinary University in Brno was dissolved, made into the Veterinary Faculty and connected to the UOA in 1952. The Faculty of Forestry was transferred to the Civil Engineering University in Brno, but then returned to the UOA in 1956. Another restructuring of the institute took place in 1959. The Faculty of Animal Husbandry was dissolved and animal husbandry was incorporated into the Faculty of Agronomy. In the same year, the need for qualified management in agricultural production and an increase in its mechanization motivated the establishment of the Faculty of Business and Economics.

Increasing numbers of students and the school’s spatial problems led to the establishment the so-called Jihlava Department in 1964, where tuition of first-year students took place until 1994. The Department of Education was founded to provide additional education studies for teachers of secondary forestry and agricultural schools and vocational schools. The relaxed nature of the 1960s allowed the establishment of the following centres: for the use of radioisotopes; electron microscopy; computational techniques; scientific and technical information; an editorial centre, and unique instruments. By establishing the Department of International Biological Programme, the UOA joined the prestigious UNESCO project. A favourable political atmosphere in 1969 allowed the separation of the Veterinary Faculty and its transfer to the re-established Veterinary University in Brno. After August 1968 (the invasion of Czechoslovakia by the Soviet army), the life of the institute was affected by the subsequent period of normalization, which led to major changes of personnel and forced th

e departure of some teachers. The 1970’s were characterized by construction activities, renovation work and the implementation of didactic techniques. The 1980s brought interdisciplinary studies, a comprehensive scientific and technical program and computerization. The Centre for the Development of Biotechnology was founded. Horticultural fields of studies were detached from the Faculty of Agronomy, and so the Faculty of Horticulture was founded in Lednice in 1985, and thus four-decades worth of efforts came to fruition.

The events of November 1989 (the end of the Communist regime) brought about major changes in the life of the University. Following the transformation of the agricultural-food and forestry-wood technology industry, a transformation of the school enterprises took place between 1993 and 1995. After the establishment of the wood technology department, the name of the Faculty of Forestry changed to the Faculty of Forestry and Wood Technology in 1993. In 1995, the UOA was renamed as the Mendel University of Agriculture and Forestry, claiming the legacy of J.G.Mendel. Since 1998, the implementation of the European Credit Transfer System in all study programs of the University has been under way.

In 2000, the University’s agricultural enterprises were combined into a single University agriculture enterprise in Žabčice. To ensure continuous development of lifelong education, the Institute of Lifelong Learning was established in 2003; since 2006 it has been a university institute. The Faculty of Regional Development and International Studies was established in 2008 to provide preparation for experts in economics in a regional, national and international context.

The University has been using the name Mendel University in Brno (MENDELU) since 2010. In 2011, the establishment of an independent university institute CEITEC MENDELU within the Faculty of Agronomy incorporated the University into an international scientific centre of excellence, the Central European Institute of Technology. At the end of 2012, the University received the prestigious certificates ETCS Label and Diploma Supplement Label from the European Commission, which serves as a confirmation that its study programmes and the examination system are in accordance with the principles of the Bologna Declaration. The Hrášek Nursery was established in 2013 to allow employees to balance their family and work lives.

He was born on 20 July 1822 in a peasant family in the village of Hynčice in Moravia (Fig. 2), which is now part of the village of Vražná (Nový Jičín district). His native language was German.

After attending an elementary school in Hynčice and a grammar school in Opava, he enrolled at the Institute of Philosophy at the University of Olomouc in 1840. In 1843, he was admitted to the Augustinian monastery of St. Thomas in the Brno district of Old Brno as a novice. He adopted the name Gregor. The Brno Augustinian monks were renowned scholars who actively participated both in university and grammar school education throughout the Austro-Hungarianentire Empire. At that time, they held a position of significance in the scientific and cultural life of Moravia.

Having accomplished his theological studies in 1848, he started to attend professor Diebla's lectures on agriculture at the Institute of Philosophy in Brno. In 1853, he successfully finished his two-year studies at the University of Vienna. 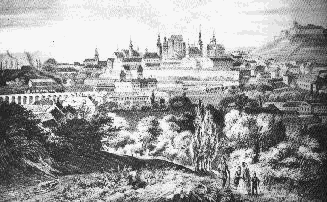 In 1863, Mendel completed his crossbreading experiments with the pea plant (Pisum) and on 8 February 1865 at the Society for Natural Science meeting in Brno, nine years after Darwin published his book "On the Origin of Species", he presented the first part of his theory on the transfer of hereditary traits. The second part of his classic work followed on 8 March. In 1866, his short monograph, "Experiments with Plant Hybrids" (Versuche über Pflanzen-Hybriden), was published.

In 1868, he was appointed abbot and prelate of the Augustinian monastery in Brno.

A year later he received his only recognition during his lifetime in natural science circles - he was elected vice-president of the Society for Natural Science in Brno. On 9 June 1869 he presented to the members of the Society the outcomes of his second remarkable collection of experiments concerning crossbreeding hawkweed (Hieracium-Bastarde). In the same year he became a member of the Beekeeping Association in Brno.

In 1883, Mendel fell seriously ill and on 6 January 1884 he died at the monastery. He was buried in an Augustinian tomb at the Central Cemetery in Brno. The requiem in the church was conducted by the later world-famous Czech composer Leoš Janáček.

Mendel believed the variability of species to be a proven fact. He made a remarkable diagnostic changeover when he refused to assess an organism as a whole, but considered the organism's individual traits. He understood the individual traits of an organism, e.g. the shape of a mature seed, contrapositively, i.e. one seed round and second one angular were for him as two sides of one coin. He assessed the transfer of their genetic endowments. In his interpretation, the offspring was not a result of the coalescence of the original maternal and paternal cells, but of the union of genetic endowments for individual traits of maternal and paternal plants. This revolutionary diagnostic method enabled Mendel to evaluate the results of the crossbreeding of seven pairs of pea plant's traits, where all the crossings were based on the principle of dominance and recessivity of the contrapositive traits.

You can find more information about the experiment in the presentation Gregor Mendel - His Hybridisation Discoveries and their Significance.

Mendel formulated his fundamental laws of hereditary in 1866. They were based on the analysis of the genetic crossbreeding between the cultivated, i.e. producing offspring with identical traits as their parents, pea plants (Pisum sativum), differing in particular, well-defined traits, such as the shape of the seeds (round or angular), the colour of the seeds (yellow or green) or the colour of the blossom (violet or white). 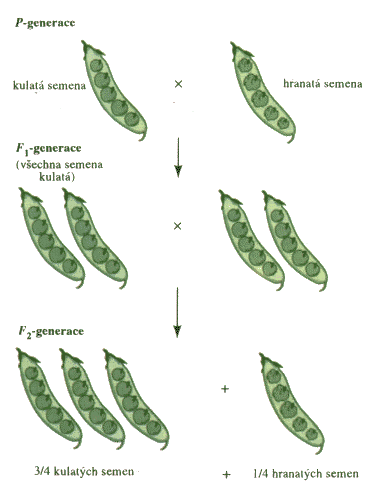 Mendel hypothesized about this phenomenon and stated that various pairs of contrasting traits are each a result of a factor (nowadays called a gene) which has alternative forms (allels). Each plant contains a pair of genes which define a particular trait; each parental plant provided one gene. The allels defining the shape of the seed are labelled "R" for round seeds and "r" for angular seeds. Almost all of Mendel's contemporaries chose to ignore his theory of hereditary. It was partially due to his application of the theory of probability in his calculations, which was an unknown ground for most the biologists at that time.

In 1900, Mendel's work was rediscovered and his laws were shown to be applicable to the heredity of plants as well as animals.

Mendel's work laid the foundations for a new scientific discipline which investigates the passing of genetic information from one generation to another, and examines the mutual relations between genetic units and traits, and their relation to the environment. His work did not intrigue scientists until the beginning of the 20th century, 16 years after his death.